My brain is going to explode! 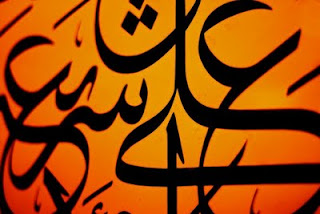 Arabic class is INTENSE. Wafa points to a word and we sound it out on the spot. Every letter has four styles depending on where it is in the word and nine sound variations, I think. The class back-up language is French, which caters more to the Frenchwoman and the half-Dutch, half-Moroccan girl than to me. That's okay, though. Today we learned six. Yes: six letters. And I am not even confident about them! Right now I am relying on memory tricks.
This letter is cute, and so are sheep, which say "ba ba ba."
There are two dots. "Two" and "ta" sound similar.
The little symbol inside the big one is like a "calf" ("kaf") inside a cow. On the right, I imagine a man throwing a javelin and screaming, "Yes, I can!" "Can" reminds me of "kaf."
That swish is a tiger tail. Tiger's say "RA-OWR!"
In cultural psychology we learned about "memes," which are packages of cultural information, distinct and capable of being pass to new generations, like "genes." The theory of memes is basically dead. And on the right, that letter looks like a dead person (see the head on the right?).
On the left, you can see the cute little "lam"'s tail.
Tomorrow I'll wake up and sit at the dining room table to sound out these letters and the words they hide in. My brain is too buzzy now, after a morning of Arabic, an afternoon of walking around the old medina ("cultural activities included"), an evening of teaching, and a night of lesson planning. Rinse and repeat until Friday. WOOT! WOOT!
Labels: Arabic

Yay for comments! Nothing mean please, and that means you, Anonymous.